As it is the end of the year, party’s at every corner, start to pop up. Christmas party almost every weekend in December. Most of them have the same boring food. But not the one that we went last week. It was my 8 years old daughter swim team Christmas party.

One of the families present there,  has an exchange student from Romania, Ana, and she made an eggplant salad like I have never eaten before. She sad, that the eggplant salad is a traditional food in Romania. I thought that maybe it’s  just me who likes it so much, but,  by the end of the party, the eggplant salad bowl was empty.

I loved it so much that I had to have the recipe, so I hunted down Ana next day as she already left by the time I have realized I need the recipe for it. It turns out that it’s simple to make. I had to share the recipe with you.

That’s it.
Roast the eggplant on the BBQ until the peel gets hard and the inside, the flesh gets soft. But before putting the eggplant on the BBQ poke it a couple of times with a fork otherwise, it will explode from the inside pressure. That way the juice from it will come out (which is a good thing). You don’t want any extra juice in your salad. I roasted them for 30-45 minute. Don’t forget to turn the eggplant on every side so it
can cook evenly.
Once it’s done, let it rest for 15-20 minutes for the extra juice to come out. ( I forgot about mine and left it to rest for 1 hour)

After you left the eggplant rest, peel of the outside and chop it finely with a wooden spoon. Add the finely chopped onion and the oil, and then mix them. Add how much salt and pepper you like.

The egg yolk and the mustard are for a homemade mayo, but if you don’t know how to do it or just prefer the store bought one, you can use the store mayo. I homemade mine. It’s easy.

Mix the mayo with the eggplant salad and you’re done. 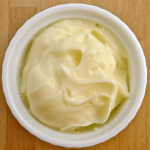 It was such a success in my house that I had to do it again after 2 days.

You can decorate it with tomatoes, parsley or olives. My 8 years old loves olives so you can guess what I have used.

With freshly baked bread ( yes I am baking my own bread, but who doesn’t these days?) the eggplant salad was gone in 1 hour.

Have fun and enjoy!